COMBINATION OF ANTI-CANCER DRUGS IN THE SAME LIPOSOME

The strategy of anticancer drug cocktails has proved to be very effective in the treatment of cancer, where the rationale is to attack the disease on as many fronts as possible. lipoCure has conducted several studies that demonstrated that Liposomal co-encapsulation of anticancer drug combinations can potentially and profoundly influence therapeutic outcomes. Similarly, drug combinations can be optimized pre-clinically through pharmacokinetic control by remote loading into nano-liposomes. The combination of topotecan (TPT) and vincristine (VCR) was selected. The ratio-dependent synergy between these two drugs was evaluated, in an attempt to improve the therapeutic efficacy of this combination in vivo. The interaction between the drugs was evaluated in tissue culture by the median-effect analysis. Certain ratios of combined drugs were synergistic, whereas others were antagonistic, implying that the most efficacious combinations should be at a specific fixed drug ratio. For in vivo evaluation, nanoliposomes were co-remotely loaded simultaneously with both drugs by transmembrane ammonium sulfate gradient. 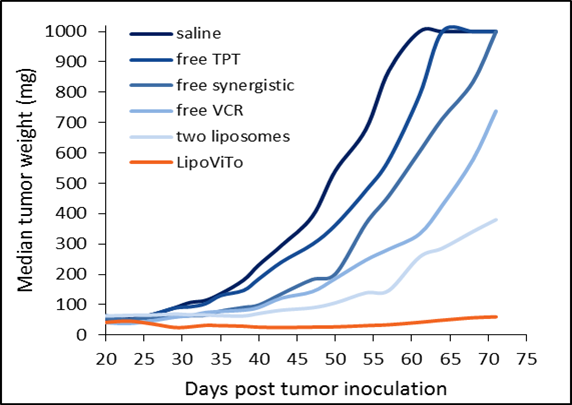 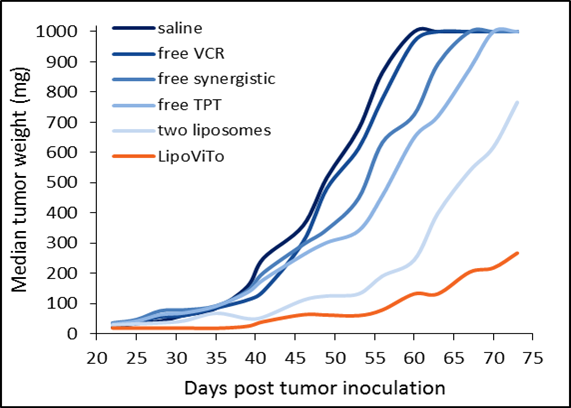 VCR and TPT were successfully co-encapsulated at therapeutically relevant levels in the same nano-liposome (LipoViTo). The nano-liposomes controlled the drugs’ “biofate” and maintained a fixed drug ratio in vivo, allowing one to compare the therapeutic efficacy of various predefined drug ratios. Pharmacokinetics and biodistribution studies showed that LipoViTo delivers the two drugs simultaneously to the tumors, where they are released at a pre-defined ratio.LipoViTo was more efficacious than the free drugs and liposomes with one agent, singly or in combination, in two tumor models in mice. LipoViTo co-loaded with both drugs corresponding to their maximal tolerated dose (MTD) ratio resulted in the best therapeutic efficacy.